Tune in and jam out 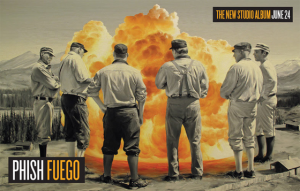 “Fuego, Phish’s twelfth studio album (and first in five years) is available for pre-order now at Phish Dry Goods and will hit stores June 24th. Fuego will be available on CD and as a limited pressing 2-LP set on 180g Orange vinyl and digitally. You can listen to “Waiting All Night“, a track from the new album, now at http://www.phish.com/fuego
Fuego was recorded in late 2013 in Nashville, TN after a series of writing sessions at The Barn in VT and was produced by Bob Ezrin (Pink Floyd, Lou Reed, Peter Gabriel). While Fuego’s ten new tracks include songs that individual members brought to the table in usual Phish fashion, the bulk of the material was written by all four, working together at The Barn.
In addition to CD and digital, Fuego will be released as a limited first pressing Orange Vinyl set (two 180 gram discs, packaged in a beautiful gatefold sleeve to keep your discs warm).
Everyone who pre-orders from Phish Dry Goods will get a custom Fuego old-school matchbook and will automatically be entered to win a set of Fuego vinyl test pressings, autographed by Phish and a pair of tickets to a show of your choice on Phish’s 2014 Summer Tour. You’ll also receive an instant download of “Waiting All Night”, from the new album.”