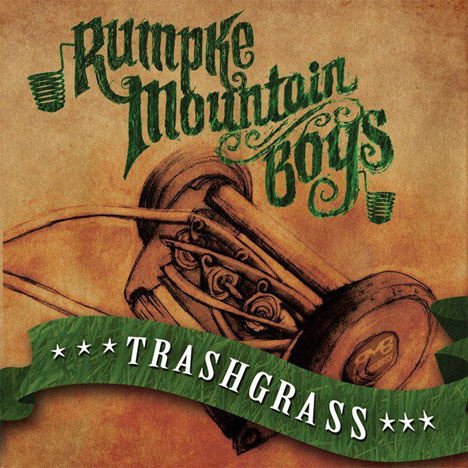 From Rumpke Mountain Boys
“Energized from their stellar performances at some of the top music festivals in the east, including All Good, Terrapin Hill Music Festival, Appalachian Uprising, Shoefest, and their own festival, Snugglefest, Cincinnati, OH’s Rumpke Mountain Boys much anticipated sophomore album Trashgrass is set for release on November 2nd.

Named after Rumpke Landfill, the highest point in their home of Hamilton County, OH, their remarkable energy and passion shine through in their marathon live performances, their songwriting has won critical acclaim, and they’ve shared the stage with iconic artists such as Larry Keel, Leftover Salmon, Tim O’Brien, Ralph Stanley, Keller Williams, Yonder Mountain String Band and Del McCoury. According to Vince Herman of Leftover Salmon, The Rumpke Mountain Boys are “high energy, hot licks, cool tunes – A party waiting to happen.”

Recorded live at a private party at Stonedbarry Hill, then carefully mixed over the past year at Soap Floats recording studio in Cincinnati (a la “Live Dead”), Trashgrass is the Rumpke Mountain Boy’s first release since the departure of bassist Travis Gates and addition of Memphis-bred upright bassist JD Westmoreland. Consisting of accomplished mandolin player Ben Gourley, Adam Copeland on acoustic guitar, Jason “Wolfie” Wolf on banjo, and Westmoreland on upright bass.

Rumpke’s sound is refreshingly unique, drawing on influences such as the Grateful Dead, Ralph Stanley, Tom Waits, and Jimmy Cliff. According to a review in Grateful Web, “while Rumpke Mountain Boys are known for their fun-filled live shows, the new release captures the Rumpke magic well, oozing with fiery banjo picking, amazing vocal harmonies, and impressive songwriting done by all four members. Trashgrass is organic, balanced, and most of all, FUN and their energy shines through on this release.”

The year 2012 has been quite a memorable year for Rumpke, winner of Cincinnati Entertainment Awards Best Bluegrass Band for the past 7 years running. After gaining traction over the winter, the Rumpke Mountain Boys became one of the most sought-after festival acts east of the Mississippi. The band performed at All Good Music Festival at Legend Valley in Thornville, Ohio in June, and drew a early 10:30 AM set that festival attendees raved about for months, drawing over 1,200 fans. They also host their own musical festival named Snugglefest, where this year Larry Keel and Natural Bridge, The New Old Calvary and others treated music fans to a picking fest to be remembered for ages.

The Rumpke Mountain Boys are headed a regional tour in support of the new album, and will be hosting a CD release parties in the weeks following the November 2nd release date at venues listed below. Pick up Trashgrass today and don’t miss the opportunity to catch them live to find out what all the buzz is about. And tell them Vince Herman sent you. For tour dates, artist bios, and information re: distribution of Trashgrass, go to www.rumpke.ning.com.”